Trinity Functions refers to the individual powers of the three Trinity Titans who direct the affairs of heaven and earth. 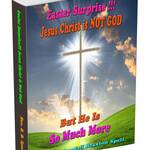 Is Jesus Christ GOD or Not?

Before everyone gets their shorts in a bunch … and starts yelling words like heretic and blasphemy … they really need to actually read their Bibles to find out exactly who Jesus Christ really is.

I am a theoretical theologian … and no one has to believe one single word of these observations … but you may need to know that I believe in the same GOD that Jesus Christ believes in.

First, I will let everyone in on a little secret … NO ONE would even know GOD the Father if it were not for Jesus Christ … and many people may be fascinated by this information.

Jesus Christ is NOT GOD … and two-thirds (≈ 5 billion) of the world’s people are not Christian. Most people do not seem to know anything about the Trinity Doctrine that claims that Jesus Christ is part of a triune GOD.

Most of the people who reject Christianity seem to do so because they cannot crack the man-made code of the Trinity Doctrine … and most of them think that Christians are blind-faith fools.

People should get a grip on themselves and realize that it is OK to accept  or to reject  the Trinity Doctrine … and the Bible says so right there in Romans 14:22 (and that theology goes far beyond the foods people eat).

However, with a different point of view … many may find a way to believe in the unequaled authority and power of Jesus Christ granted by GOD the Father in 1 Corinthians 15:27  … and become a believer.

One-third (≈ 2.5 billion) of the world’s people claim to be Christian … but they do not seem to understand the Trinity Doctrine either. When they pray … most of them do not have a clue who they are praying to.

It is both sad and comedic to listen to preachers all over the world who try to explain what the Trinity Doctrine is … or what it means … or just how three different entities can be one GOD with co-equal parts and powers.

Jesus Christ is not equal with GOD the Father … and he even says so in John 14:28. Go back and review this verse above ( 1 Corinthians 15:27 ) and digest what it means.

The attempts at scriptural pretzel-bending … to cram GOD the Father, Jesus Christ, and the Holy Spirit into one tiny thimble … are amazingly clever, but wrong.

In 1 John 5:7 … the phrase “and these three are one” was NOT in the original manuscripts … and this is one reason why so many people have such great confusion because of this editiorial (lie) insertion.

The triune-god concept was NOT created by the Catholic Church … and it is NOT found anywhere in the Bible.

It was conceived by Semiramis to include her son Tammuz … and her dead husband Nimrod … in the Tower of Babel era.

This concept has been so successful … at deceiving and controlling people … it has been used ever since for religious and politic purposes. For example, the Egyptians used it to depict the power and functions of their gods.

But they are also sadly confusing and bewildering to many people who are earnestly seeking to know and to serve a “three-colored” GOD that looks like a “tie-dyed” shirt or “spin-art” print.

This book could be very large. I have decided not to make it an apologetic (an excuse) for incorrect thinking or displacement of Biblical truth … nor to try to cover every possible or relevant point of interest on every possible Biblical topic.

Instead, I will focus on the main point of Biblical truth … and that is, GOD the Father is the only true GOD … and that Jesus Christ is His only “created-begotten” son (but … with celestial DNA … and just how is explained in the book below).

There is Biblical truth that Man-Jesus Christ was created … as shown in the Bible. His DNA is different from all other human DNA … but he is totally human … and totally divine at the same time.

Just how this can be so will be shown and explained from information that can be found within the pages of the written Word of GOD the Father (i.e., the Holy Bible) … and fully explained in the book below.

But, Jesus Christ has so much power from GOD the Father that it is really a moot point.

Lucifer wanted GOD’s throne … and look where that got him.  Jesus was very careful not to answer any questions asked of Him about His own divine nature.

Nevertheless, Man-Jesus Christ knew exactly where He came from before the Earth even existed ( John 17:5 ) … and He got His wish (in Matthew 28:18) … and His power confirmed by GOD in 1 Corinthians 15:27 (shown in link above).

The functions of GOD the Father (Creator), Jesus Christ (Reedemer-Executor), and the Holy Spirit (Facilitator)  are all connected … but they are all three totally separate and different … even though, their final purposes for the kingdom of GOD the Father are all the same.

When people understand those connections/functions among GOD, Jesus, and the Holy Spirit … their confusion goes away … because they can now understand who GOD is.

It is OK to pray to worship Jesus Christ … because GOD the Father commissioned Him with that power and authority (i.e., as Vicar of GOD) … while we are now able to keep them separated according to their functions.

The Gentile-age of Christianity … ushered in by Jesus Christ … is coming to an end but will culminate in a “visible rapture” (removal of people) from Earth.

But the Jewish-age of Christianity … ushered in by Two Witnesses and 144 thousand Jewish evangelists and on into the Millennium … will come to an end with a second “silent-rapture” (removal of Christian people in the Millennial period) from the Earth.

Careful observations show that the silent rapture of the Millennium is world-wide … occuring all over the world both at night and day … as shown in Luke 17:34-36.

After that come two final judgments (i.e., Throne of GOD and Throne of Jesus Christ).

Then,  eternity future probably begins with a populated New Jerusalem (Jesus’ Ark of the raptured  Saints) … cruising through the heavens ( John 14:2 ) … during the creation of the new heavens and the new earth (Isaiah 65:17 ).

Jesus Christ spins out (ie., creates) new heavens and a Earth in 2 Peter 3:13 while in the New Jerusalem Salvation Ark of raptured saints … in conjunction with the commands/wishes of GOD the Father.

There will be pleasures forever (Psalm 16:11) … and just to be sure that the contentment continues on and on … GOD the Father will just keep on creating more stuff forever with Jesus directing it (Isaiah 65:17).

This book is available on Amazon in both eBook and Print Book.  The eBook has all active digital links … but the links are not active in the Print Book.

*This print book is good for collectors … and it will look good on any bookshelf … but the eBook is the most versatile for information and study.