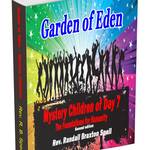 The Garden of Eden

This presentation will show where all those people probably came from that were already here on Earth when Adam and Eve were banished from the Garden of Eden.

The Sixth-Day was much longer than  24 hours … and you can bet that Adam and Eve were not “resting” on the Seventh-day … you know, with those beautiful super-powered hormone-propelled bodies (and nothing else to do all day!)!

Anyway, where did Cain go to find his wife after he killed Abel … and how is it that she was already present on Earth?

This is not a work of fiction. The purpose of this presentation is to reveal that which has been shown … but not seen or understood from the beginning of the Bible.

There are no points of faith that have to be agreed upon in this book. For example, there are no “soul-snatching” dogmas that must be accepted … just information to be considered as a real possibility for the beginnings of human civilizations.

If we could resolve this question: “Where did all those people come from in human history,” we could satisfy many religious and scientific questions. The answer has been right in front of us for centuries … but seemingly overlooked.

The revelation in this little book is probably the biggest oversight in human history. This information would have provided the lynchpin for recognizing foundations of human civilizations. It is now revealed for people to see for themselves.

The “children of Eden” are actually the cornerstones of all civilizations. However, this point seems to have escaped most “readers” of the Bible for centuries.

Or, scholars may have been led in other directions because of the story of Noah’s flood … thinking that the possibility of previous populations would have been irrelevant … but that is not accurate.

It seems that many other cultures have their own flood stories … so … it seems reasonable that they may have also been contacted with information to save themswelves. Remember, Jesus Christ pointed out to His disciples that He had other “Sheep” or people (John 10:16).

Nevertheless, the purpose of this book is to establish the foundations for human civilizations so that we can anchor the validity of the creation account. Noah’s flood is too extensive to cover in this account, but it can be covered in a later accounting.

Many people refuse to believe the Bible, and then give up on their faith.  They cannot reconcile scientific reports with missing Biblical accounting for the numbers of people who apparently were here when Adam and Eve emerged from the “Garden.”

Keep in mind that science does not have all the answers. The Bible requires us to use our minds to “think.” There is no true faith or belief without thinking and reasoning.

This presentation provides a reasonable explanation for the foundations of human civilizations that emerged from the “Garden of Eden.” You do not have to believe it.

None of the information presented in this book is “soul-binding” … that is, you do not have to believe it one way or another for salvation.

This book is available on Amazon in eBook or Print Book versions … active links can only be opened in the eBook version:

Note: If I don’t do it … someone should … write a book about the Garden of Earth. Show how the Ark of Jesus (the New Jerusalem) saved people in two Raptures and took them from the destruction of old Earth to the new heavens and new Earth. Get ready for a Jupiter-size new Earth (John 14:2).