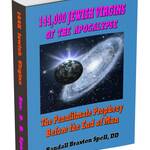 144,000 Jewish Virgins Of The Apocalypse

And since these two subjects (i.e., Science and Religion) can be a bit confusing, I will bounce back and forth and repeat things a little bit here and there in the book to reinforce some points.

But first … you must get off your “flat Earths” and take off those “religious blinders.”

Science and religion often go hand-in-hand … but just as frequently … they diverge for lack of information.

For example, there is something that can, and often does, go faster than the speed of light … and there is irrefutable proof of that fact … but it does not violate any laws of physics.

There is also irrefutable proof for the exact nature and origin of the DNA of Jesus Christ … and I know everyone will have fun with this information. Plus, it shows why Jesus was born without any original sin.

Water actually exists in four states. Most people already know three of them, but readily recognize the fourth when explained.

I will provide answers to both of those thing above somewhere in the 144K book … and just to keep you interested … I will also show the location for the irrefutable proof for the identity of Jesus Christ’s DNA.

Many people, who know very little about science or religion, will probably grab this book out of curiosity just to see what’s in it. But, FYI … be prepared to find out … that Jesus Christ has NO human ancestors (but is still human).

For those who do not know much about religion or gods … here are three things they should know:

For those do not know much about science or reality… here are three things they should know:

Nevertheless,  it is true for both science and religion that … everything will never be enough.

Here is a pop quiz that I suspect 99.9% of all Bible students, preachers, teachers, Bible colleges, “commercial Christian pastors,” and Christian websites will get wrong.

Here is the question: What is the penultimate event that must be completed before the return of Jesus Christ?  [You have five seconds … that’s why it is a “pop quiz.”]

But really??? What are those 144 sealed, virgin, Jews doing? Why are they popping up somewhere around the Tribulation Period? The author has a pretty good idea of what they show up to do … especially in the Millennium.

The Christians of the first visible Rapture will not be equipped with the correct information about the functions of GOD, Jesus Christ, and the Holy Spirit to spread the penultimate gospel.

Therefore … as some Christian theologians wrongly teach … the raptured “Tribulation” saints will NOT be serving as kings and priests during the Millennium. Why? Because they do not have the correct gospel message.

They will actually already be in the New Jerusalem (John 14:2) … and waiting for the saints from the second silent rapture … of the Millennium to arrive.

Why? They will still be trying to teach the triune-god concept … which originated way back around the Tower of Babel time. Semiramis introduced this concept to include her son Tammuz and her dead husband Nimrod.

The Catholic Church can neither be credited nor blamed for the Trinity (triune-god) concept.

Since Semiramis came up with this concept … it was widely used in Egypt for their gods … and it has been widely employed in religions around the world.

The 144k sealed, virgin Jewish evangelists will take the true gospel (not temple worship) around the world during the Millennium (similar to Acts 1:8). Their message will more closely resemble the message in this book: Trinity Functions.

The book about the 144,000 Jewish Virgins of the Apocalypse  is available on Amazon in both eBook and Print Book versions (Note: URL links are active in the eBook version):